Weekend away episode 1 - The snitzel's revenge.

This is a little trickier to write than I’d anticipated. The hotel here was supposed to have a net connection in every room, but instead there’s a single booth in a lobby near the foyer. The plan was that I’d blog daily (and brought a laptop specially) but because the connection wasn’t available it became too much effort to do so. Also we were quite tired from walking continually, and as a result, were most inclined to just crash when we got back to the room.

So here I am on Sunday night, trying to re-collect all my thoughts, feelings and impressions from the last 3 days. To help do this I’ll try to cover each day individually. You may therefore find it helpful to read each day’s entry as if it has been made fresh.

3.10am is a harsh time to start any day – one is inclined to ask while showering “do we never learn?”. Catching a plane for a 6.45am departure is a dumb thing to do. However we did actually succeed, and arrived in Vienna at around 10.20 local time. Walking through the terminal to baggage collection I could already tell we were in Austria: the ceiling covering had been removed in the corridor, and I could see how things were made. No other country in the world would bother to make small pine boxes with careful dovetail joints to encase the PA speakers in this kind of ceiling.

I arranged a cab to take us from the airport to the hotel (chickened out of the train: too much hassle and we had a case which doesn’t roll that well). The woman on the taxi stand had good English (they nearly all had good English) and talked me into booking the return by cab as it was cheaper both ways. Our driver was friendly, chatty and told us he hoped we’d brought coats, ignoring what we were wearing, as the temperature would drop to minus 10’C on Sunday. We passed through the industrial outer areas and the Vienna woods on the way in, then into the city proper, round the ring and finally to the hotel.

I had a sense of anticlimax.

If you’ve seen a number of European cities, as I now have, after a while they all begin to look the same. The houses by the Vienna woods look just like many around Stockholm. Most of the buildings would pass un-noticed in Budapest or Copenhagen. The Hofburg and some of the other palaces are grand on a scale that few other cities could equal, but the city buildings themselves, while opulent, aren’t unusual on the outside.

Our hotel (the Hotel de France) was a large old building, actually purpose built in the late 1800s on the Ringstrasse, very close to the centre. Check-in was fine, and despite being early, we were given a room. It was here that my impressions really started. The room was decorated ‘traditional’ style, and because of a high ceiling, darker walls and being very warm, felt quite small. I flicked on the TV, and the first thing that came up was a 1960s version of Cinderella in German. This immediately set a tone for me – I felt as though I’d been transported back in time. The décor, manners and even the TV felt as though they belonged in the time of our parents. This feeling was to return frequently.

There were a couple of things we needed to do to obtain some travel cards and confirm a tour for the following day, so out we went on what turned into a long walk. Eventually we wound up at die Wienerin in Wallnerstrasse, enjoying Goulash soup for a late lunch. This soup tastes very much like a spicy oxtail soup, but is quite salty. It was served with beautiful bread, which had salt crusted on top. I (not so beautifully) managed to save the last, saltiest bit of bread until we’d just got ready to go, them popped it in my mouth. Eckk. Crinkled mouth syndrome.

We headed back to the hotel for a rest, recouping our strength for the Christkindlmarkt at the Rathaus (town hall).

The Rathaus and market were only about 10 mins walk from our hotel, and we headed over there about 6.00ish, when it was properly dark. A few flakes of snow were falling, but nothing very much. The first thing we noticed as we got near where the number of lights in the trees. These resolved into different shapes: hearts, stars, balloons, faces – all kinds of things. Next there was a ‘train’ carrying children and their parents to an area with buildings containing Christmas ‘themes’. Then we finally came on the market itself.

Since it was Friday the market wasn’t too crowded. The stalls were set up in wooden huts, all side by side in the grounds of the Rathaus. Some sold wood carvings, usually of nativity or religious figures, some sold baubles, others toys (many hand made from wood - Santa’s elves had been busy!) and all kinds of things. There was a stall selling scented candles that had very oddly shaped candles, which the proprietess held out for all to smell. My initial reaction was “must be my dirty mind”, but it was actually called ‘love’ and was shaped like a vagina. Europe has a very different view on some things compared to the English. Bizarre lights aside, it was really very special, and produced a certain level of anticipation. I can't say that it felt like 'Christmas' because there wasn't much of Jesus visible, but it covered the word 'magical' in a way that Disney could only envy. 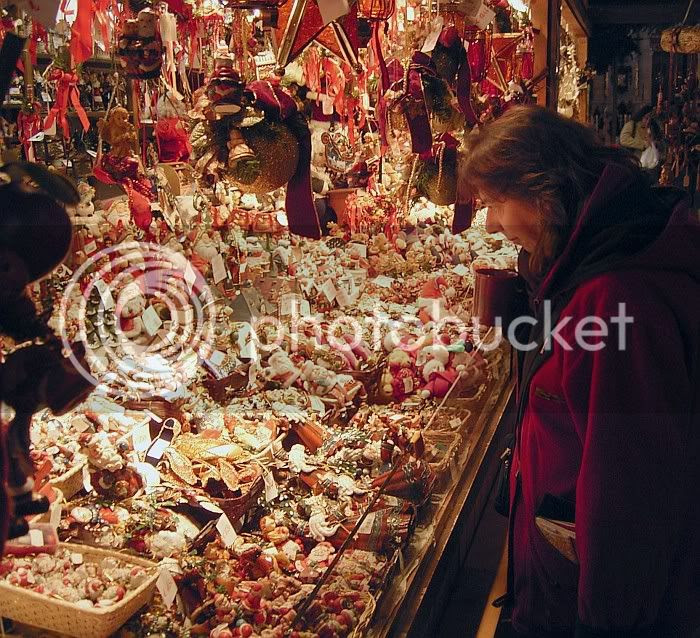 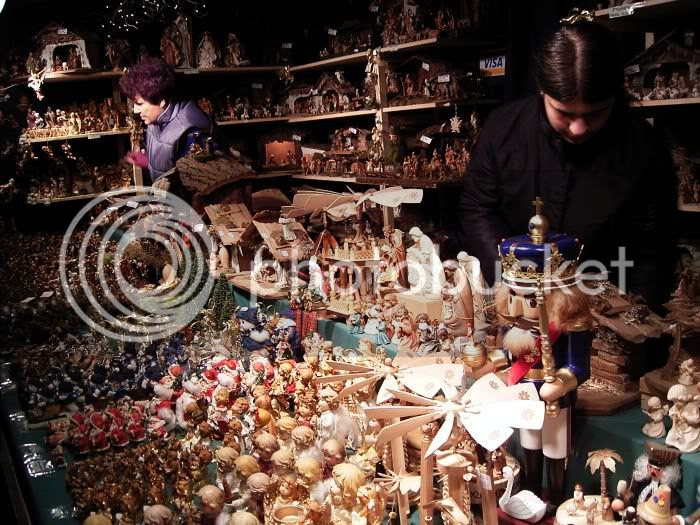 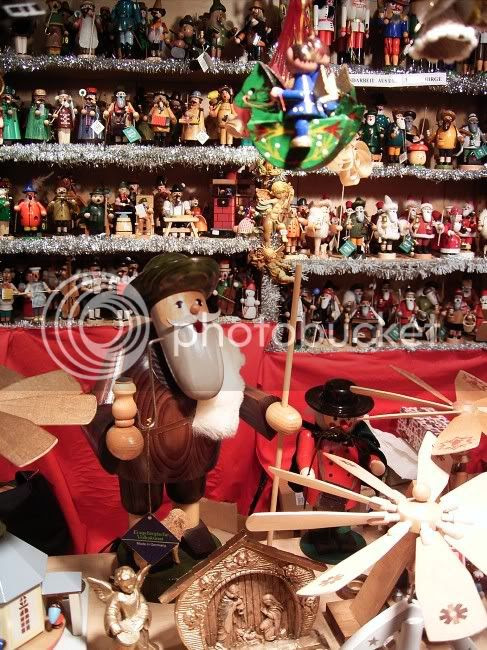 We bought sugar-coated nuts, Gluhwein, Bratwurst in bread, munching and stumbling our way round the market. By about 8.30 we’d seen most stalls, and were ready to drop, so headed back to our hot little room, incomprehensible TV and sleep.