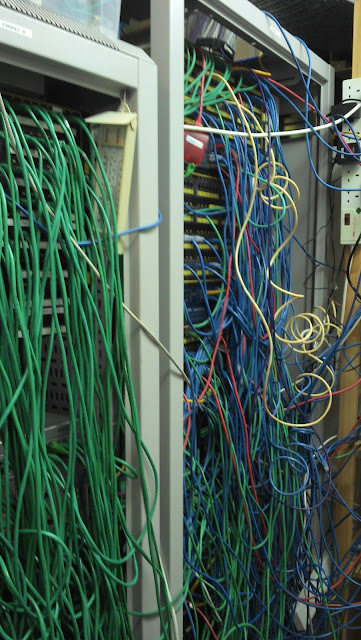 To update this post, I was in work Wednesday/Thursday this week. Wednesday morning there was a certain amount of stress from the lovely Jacqui, trying to get the phones working and not knowing why they weren't on. The last time I'd been aware of the phone system in the building was when the digital exchange was in a beige box the size of a chest freezer up in the coms room, but when we went in there was only empty space where it used to stand.

After a bit I managed to trace the phone line to some Samsung rack units of about 1/50th the size of the previous unit, that were not showing any signs of being powered up, and from there became aware of a faint high pitched whine over the sound of the other kit that appeared to be coming from a UPS. Hum. The UPS unit was, in fact, very interrupted, and about 10min after plugging the phone control system back into the mains communication was restored.

In the near future facebook will have to go.

I find it too difficult not to say a moderated version of what I think, rather than say nothing at all.
at 12:40 am No comments:

Not everything is as it seems.


This is interesting for the different images it produces, and one has a sense that 'Michael' is actually directing the photographers through the information he feeds them.

A point at a tangent to this is how accepting we are of people's stories, without questioning their veracity or asking if a viewpoint is valid. In this situation the photographer's job is just to take a great picture showing the character presented to them, but I wonder if things would have been different if they had questioned more deeply? It also makes me wonder if we are also just too accepting of the reality presented to us, and whether we should challenge that a bit more often, rather than just accepting that as valid 'because it works for you'?
at 11:03 am No comments:

I'm trying to understand why the church is the shapes it is in the present, and particularly get to grips with the early church and how it wandered from being Spirit-filled and apostolically led to becoming a religio-political instrument that didn't reflect new testament values.

And reading that last sentence back makes me wonder if I have become what I rejected so hard as a fundamentalist.

Various translations of Eusebius history of the early church are available free of charge through the Kobo book store, and it seemed daft not to take advantage, especially since the latest updates to the software has made the reader far more useful and responsive than it ever was before.

Some of it is, frankly, as dull as ditchwater. Some demonstrates that the behaviour we see on facebook is common human nature, indulged in by people at every level including appointed bishops in the church, spreading lies and stories (calumnies) about each other. Some demonstrates that discipleship does not, in fact, reproduce after the discipler but in fact seems to easily give rise to all kinds of intentional heresies and false teachings.

That's not really what I want to mention.

There's quite a bit on martyrs, which is not surprising given how severely the early church was persecuted, but the descriptions of persecutions in Lyons and Vienna around AD180 have, at least partially, kept me awake tonight. It's hard to imagine how people could live through, let alone continue to testify to their faith after being tortured and made to suffer as many of them were - the Romans really make ISIS look like a bunch of schoolboys. And the church, faced with such utter awfulness, had a theology that declared being able to suffer for the name of Jesus was a wonderful thing.

I'm trying to see where this can fit into 21st century western Europe, where any kind of suffering or pain is immediately bad, and every kind of hardship must be relieved (except if you're from a poor people who must supply the wants and needs of us rich ones). The comparison is enough to make me ask if comfort in the way we have it right now is actually wrong at a basic level, and is calculated to produce people addicted inescapably to wealth and more comfort.  I feel the draw myself, the desire for more and more things to enjoy just owning and with which to fill my home, never mind whether they are needed or are ethically produced and sourced.

A nagging question I've had when reading about ISIS and their evils is "what would Paul do?".  I could imagine his first reaction would be to get out there among them, seeing a new and fertile ground in which to plant a church and disregarding the risks for the sake of growing the kingdom of God. To the best of my knowledge there are some Christians out there working among them, but they don't come from the Christian west. Could the western churches embrace a theology of suffering that would enable their best to go out to such places, knowing some at least would die in horrible ways, and seeing that as wonderful instead of earth-shatteringly dreadful?

It also wants to make me ask if such a reaction is right, and if it is, how have we been seduced?

I was gladly radical as a new Christian, happily fundamentalist, certain that as Christians we should expect persecution and hardship. I read a book about a Russian soldier (Vanya) tortured and eventually killed for his faith.  Somehow my theology that recognised Satan at work in people, inspiring and even driving them to do terrible things, has been blurred by the comfortable lifestyle I now have. I wonder if the church is going to have to rediscover a theology of suffering before it can start looking like the body of Jesus again?

So I guess this is goobye.

In contrast to our Spanish trip we've been really cosseted this time. Heathrow T2 was great, Lufthansa was nice to fly out with and now Frankfurt T1 is actually luxurious on the pre-security side. Even in the B departure area it's colourful. And there's free WiFi without the need to even sign in!

Packing was a little tight for the return, with a pack of marshmallow kisses/nipples tucked away. My camera is going to have to board the plane in a coat pocket. :-)

Electronic boarding cards were absolutely fine, expected even, although both phone and tablet were carefully charged last night.

I'm naughty. Chris read a passage from a book to me, where the author is trying to sell an idea by telling the reader a factoid that he can't prove and can't easily be denied for lack of evidence. I called a brother in Christ a tosser, out loud. :p

Back to travel. Lastminute.com 'persuaded' me to download Tripcase to manage the booking. Initial annoyance moved to acceptance when it was useful in identifying the location of certain sites. It just popped up a message telling me which gate our flight was leaving from, without me having to find a board: guess I'm at the grudging admiration stage now. 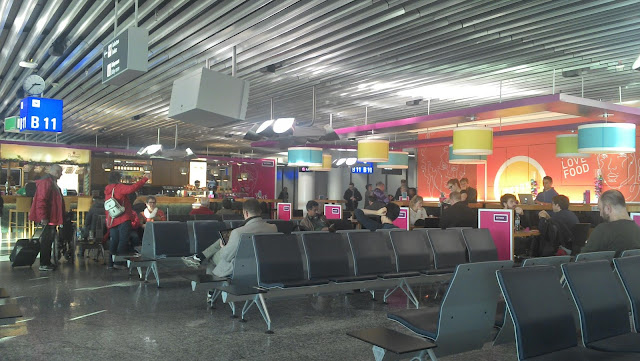 What was that rushing sound?

Probably my comfort zone whipping past.

I am no Luddite, but even I get nervous with electronic documents being stored on mobile computing devices, especially when they are boarding passes for our flights home.

Now I've seen guys waving their phones etc over document readers and all has been fine, but there's nothing as reassuring as a piece of paper with solid print and bar codes on it. Unfortunately luggage allowance did not include a printer for online check in.

The trams of Frankfurt

Don't always run when they should, but we've managed to get around a little.

On the bank of the river Main opposite the Romerberg where the Christmas market is based there was a vast flea market. I was reminded of a similar market in Vienna, where it is said that all goods stolen during the week appear. Seeing someone trying to sell a teenage boy a racing bike that was far larger than he could ever happily ride made me wonder. Probably a good place for curio shopping.

In some ways Frankfurt reminded us of London with it's large river and mix of old and new, plus very strong multi-ethnicity.

May not be the German's forte anymore, but they are darn good at designing a fat delivery system to push calories into a body. Best for this purpose are probably kartoffel puffer - shredded potato with onion mixed in batter and deep fried. Served with an apple sauce, they are solid and substantial, though the onion keeps reminding your taste buds something isn't quite right

Paprikawurst was spicy and gently warming, and very nice, while schnitzel was OK. Lebkuchen we picked up were Aldo moreish, and had a strong liquorice or aniseed undertone to the flavour.

We walked our legs off tonight and haven't seen everything. Tomorrow we'll brave the tram system.

The place of the sausage

I have never been to Frankfurt before, which is probably not a tremendous loss, but anyway we are here now.

Actually getting here was mildly challenging, with us leaving the house 20min later than planned, then less than 5 moles from the airport being held up for 30 min by a burning car (police shut the road just as we got 200m from it). Then the plane was delayed another 30min, and some fellow passengers were very stressed about missing a connecting flight (you allowed 1 hour tops, really?).

It was actually a pleasant flight, and our first on a non-budget airline in such a long time that we automatically refused the food and drink offered. Muesli and yoghurt looked nice too.

We had lunch in the underground mall at the airport - a feature of Germanic travel is that almost every small station and the bigger tram stops have a mall with really nice filled rolls etc plus a few shops, and if you need fuel then it's a great alternative to nasty fast food. Comedy moment experienced when I asked for one kind of roll by name while pointing at another.

Finally we hopped in the train to Frankfurt Hauptbahnhoff. Or rather we tried various ticket machines until we found one that could take payment, because most of them refused cash and all the various cards we had. The train also had announcements in German and English for all stops except the main station where we got out. Rolls eyes.

So we're in the Bristol with it:s friendly Costa Rican receptionist, in a small but clean room. Chris is 'breathing deeply' recovering from various headaches and I'm going to wake her soon so we can explore as it gets dark. 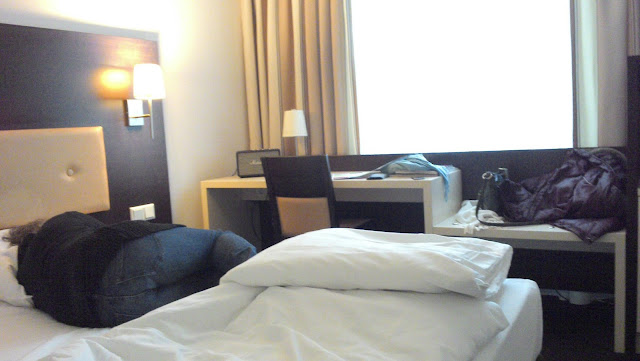