Ever wish you were an innocent, trusting people?

Sometimes ignorance seems like, if not bliss, at least a comfy way of walking into difficult times, rather than feeling concerned before they arrive.

Trust takes time to build, and I get the feeling that it's not building yet.

Quieter than intended, since a post would upload from my phone.

Still alive here, working through stuff, trying to understand why we get cross or emoted with things that are supposed to be good.

And unrelated to the above, I re-started reading Floyd McClung's You See Bones, I See An Army that I began about 3 years ago. It makes me wonder if the traditional church is almost entirely built on human designs and man-made structures to further men's ends - and it amazes me how much of our sinful activity God is able to redeem and use.
at 8:37 am No comments:

So where is that summary of summery Spain?

Puns and word play may be the highest forms of wit, but that's no excuse for not writing up some final thoughts on the hol. The truth is I've been busy since returning, flying back in one Thursday night & then heading off to work Friday morning. Our weekends have been a little more relaxed in some ways, but we've been trying to get out of the house often, and when we've not done that then have been hundreds of images to wade through.

It's now exactly 1 calendar month since we went - over 4 weeks - and the memories are starting to fade.

First impressions, if I can remember back that far. People who have followed my travelling will know that one of the first things I normally do when arriving somewhere is to take a big lngfull of air, have a good sniff to get a feel for the place. Spain didn't smell of very much at all most of the time, though the rain falling gently on Seville when we first arrived may have damped things down. There was a kind of herby smell in the car while travelling, but I suspect that was more related to the cleaning agents used than anything from the environment.

Once out of the airport and on the road everything looked really dry, never mind the little precipiation that had petered out as we began driving, and the fields were yellow-orange-brown with occasional areas of green from olive trees. The roads seemed to travel through industrial areas, with scruffy factories and lorry parks, farms that ranged from crumbly to smart, occasional retail areas (meubles seems to mean the same as in France). We passed signs to Utrera so often I had Chris confirm from the map that it was a town and not Spanish for 'exit'.

I may have mentioned already, our car was a Peugeot 208 with about 40,000 km on the clock, a small petrol engine (size unkown) and somewhat scuffed body. Inside it was nice as peugeots go, with comfy seats and a large satnav panel in the middle. No car manuals were in evidence, and the satnav system defied all our early attempts to actually input any kind of destination. I'd brought enough detailed maps, so *mostly* finding our way was OK (apart from some roadworks & re-routing that caused just minor deviations - the satnav wouldn't have understood either) and probably better than if we've used the navigation system because that would have tried to take us through central Seville, as it always did whenever possible later on.

We finally figured out the sat nav just before arriving at Osuna. On this occasion I was really grateful because the town is full of narrow cobbled streets and a one-way system. Being guided took all the stress out of this final stage, and we arrived at the hotel in better nick than otherwise.

The hotel was grand, though that was expected, and our room probably covered the same surface area as the downstairs in our cottage. It was also distinctly Spanish in that different rules seemed to apply to anywhere else we've been, and most of the time there was a distinct absence of staff, though when they did appear they seemed very cheerful and helpful regardless of language issues.

Looks like this is turning into an essay after all. That's probably enough for now.  ;-)
at 1:22 pm No comments:

Well, happy thirtyforthiversary to us.

So we get a day off together. And lunch. Now eaten. 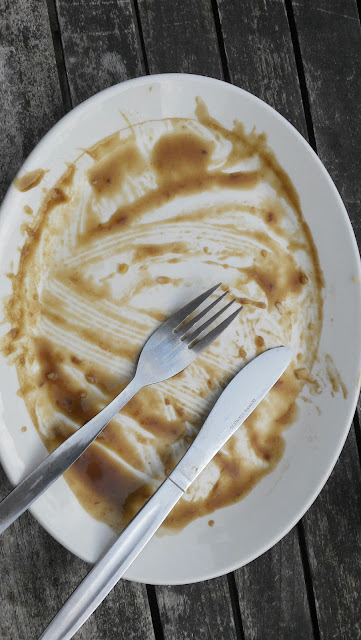 Well what do we do when feelings don't match what we want them too?

You could make it rhyme.

I'm having a 'ranty' day inside, though those are becoming more common.

Playing a 'worship' music CD by a well known international artist, and they lyric just seem to be a rehash or the words love, power, lord, need, worship, bow, you, me with a few handy joining phrases. I am aware that I may not be able to write any better (but hey, I don't take a living from selling this stuff) but that's not enough to make it legitimate. The backing back is polished and bland at the same time.

At work I want to rant about how we have forms and paperwork carefully created in a quality system, yet it feels like there's never enough data being generated to move forward above a snails pace. No-one will give a wet slap if our forms are stamped with 'uncontrolled document' or not if we don't have enough data to create a working product.

And I'm probably just being mr. grumpy-busy because I want to try to cram 2 days worth of experiments into a single day AND fit a run in tonight. My digestive system still hasn't really settled down from Spain, and the dull ache from that and nagging joints all collaborate to make me grumpier.

The study I'm supposed to be taking the housegroup through next week (based on a book) is meant to be about life-style and seemed to be pointing out sin and failure in those who don't respond well (distinctly iffy theology about Moses being shy too). I want to re-write it to use Elijah as an example of burnout from serving God, maybe add in Paul as an example of someone who suffered depression and couldn't cope with everything they were called to do. Not happy about this idea that says "if you walk right with God then you'll never burn out or get depressed".

Probably good I'm alone on this one today then. There's always a silver lining (except when there isn't).

Just re-read this and seen the typos (and they lyric). Ho hum - looks bad for a spelling and grammar nazi. :p