I was writing this sat on the plane, 5 hours into our journey and trying hard to remember events, feeling a little woozy from the flight. The last couple of days we were travelling and saw so many things. Ah, got it with Chris’s help!

Our guide in Jaipur for the next 1 ½ days was a local man we picked up on the way that first morning, called Amar. Obviously knowledgeable, but with a strong accent and he also found it hard to understand English sometimes (quite reasonably). Incredibly friendly and helpful, we really warmed to him and he to us as time went on – nothing seemed too much trouble, and he always looked out for us.

After a leisurely start we visited the Mantar Jantar whose name means something like scientific instruments. Basically it was a park that held huge sun-dials and various devices to permit tracking the movement of sun, moon and stars to enable the casting of horoscopes. I suppose it makes sense considering the way culture and mysticism spreads, but it’s fascinating in a slightly morbid way that astrology is so universal across the planet.

The stonework and structures were generally lovely to look at, and the largest of the sundials deserve admiration, simply for the sheer scale and accuracy of construction. It was built to give a time resolution of 2 seconds, but of course because the sun emits light as a disc and not a point, sharp shadows are impossible when the object casting the shadow is more than a few inches away. Maybe they followed the area of transition between shadow and full light as it moved across the scale? 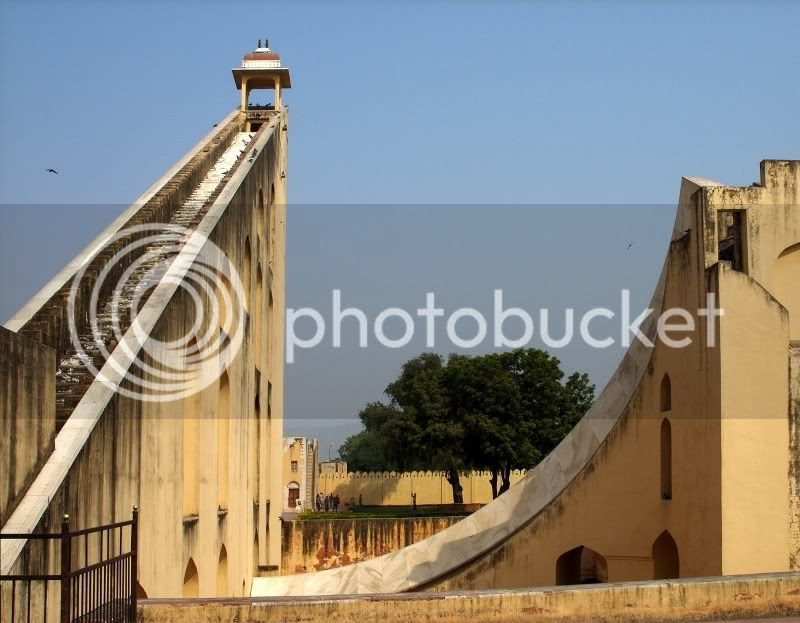 After the Mantar Jantar we were shown round the royal palace. The present Maharajah of Jaipur is 14, and studying at school, so he wasn’t there. The buildings were a mix of highly attractive and a little tired here and there, although inside were some magnificent rooms and a huge hall in which hung paintings and photographs of the maharajahs down the years. Many of these had short descriptions of their reigns, each of which tried to be terribly diplomatic about shortcomings and that some of these guys had made a mess. The palace was good, but we were getting a little ‘monument fatigue’ by then, and it was beginning to blur a little.

It is worth mentioning that the air had now cleared, after the smog of Delhi and Agra. The air was always very dry, to the point that nostrils got itchy and lips became gummy within a few minutes, and carrying a water bottle was pretty essential, even if one did not drink much on each occasion. The sun was quite fierce, and places of shadow welcome when sight seeing around stone buildings. However a nice aspect was that one very seldom felt sweaty and people didn’t usually smell of stale perspiration.

More curry for lunch, this time in a café at the palace, back to the hotel for a rest, then a walk in Jaipur (just the 2 of us exploring).

Finally, beyond all the palaces, hotels, fancy curries and sight-seeing, it felt like this was what we’d come for. That’s not to say that it was like walking into a sunlit meadow with birds and flowers and a huge sense of peace and joy – quite the opposite. Walking through a busy street in a busy city meant (for me at least) sensory overload, and really pushing out past our comfort zones, especially as we were alone. The first 200 yards were the hardest, since despite being down a quiet-ish street, we were much more visible to all the locals, and we also had to make a diversion to avoid raw sewage running across the street. 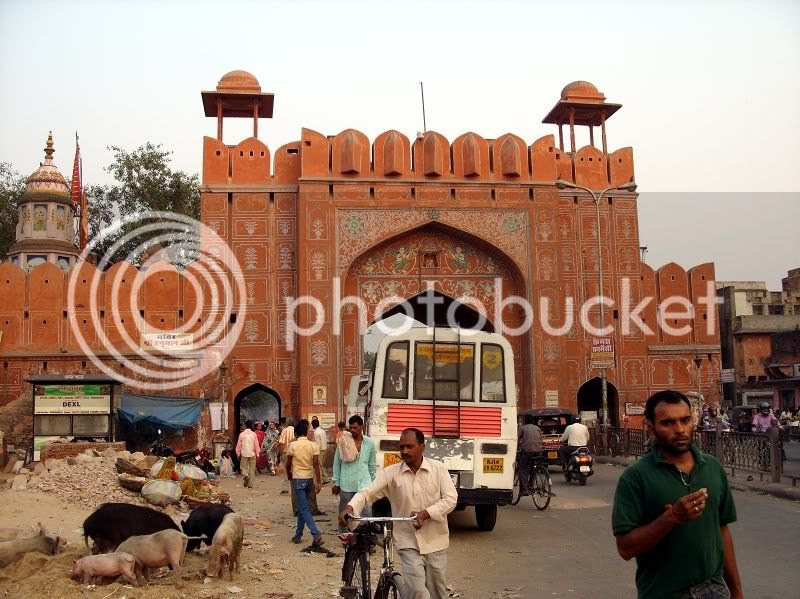 Once again, the smells were a spectrum in the nostrils, running from human waste through cumin and chilli (made my nose itch) to floral and herbal scents, frying food, joss sticks and even a sweet green smell from the vendors selling sugar-cane juice, extracted by crushing cane in a steel mangle and served with ice.

The shop fronts were much better than we’d seen in old Delhi, and overall the buildings seemed less bad despite some almost falling down. We walked about 40min in one direction absorbing the environment, before we came upon a roundabout. The significance of this is that we saw men dismantling large bamboo arches that had been built across the roads entering and leaving for Diwali decorations. There were also small tent-like structures which appear to have been lit internally for the same purpose.

Crossing Indian roads is not without it’s challenges, but the main requirement is to either wait until there is a gap large enough to ensure safety, or to wait until the traffic is so dense it cannot move and to squeeze between the cars. No driver will wish to hit a pedestrian, but even if he sees you, he may not have space or time to miss. Zebra crossings are basically a suggestion.

Walking back, we were able to use the pavement (on the opposite side that wasn’t possible, so most people walked in the road) and go close to the shops.

We stopped off in one selling pashminas.

That sounds so straight forward, but for us it was quite scary. Outside of our guides and hotel staff, the only experience we’d had of Indians in India was that they were after your money, and would be hard-nosed and desperate to get it. In turn, it had made us wary and mis-trusting of those we met in any kind of commercial environment where we were not being advised.

So in fear and trepidation we entered a shop!

The people were completely fine, just normal guys with a job to do, happy to show what they had for sale. Yes, there was negotiation. Yes, we happily paid a little over the odds for the things we wanted. But it was done with a smile and friendliness, rather than hostility and pushing. 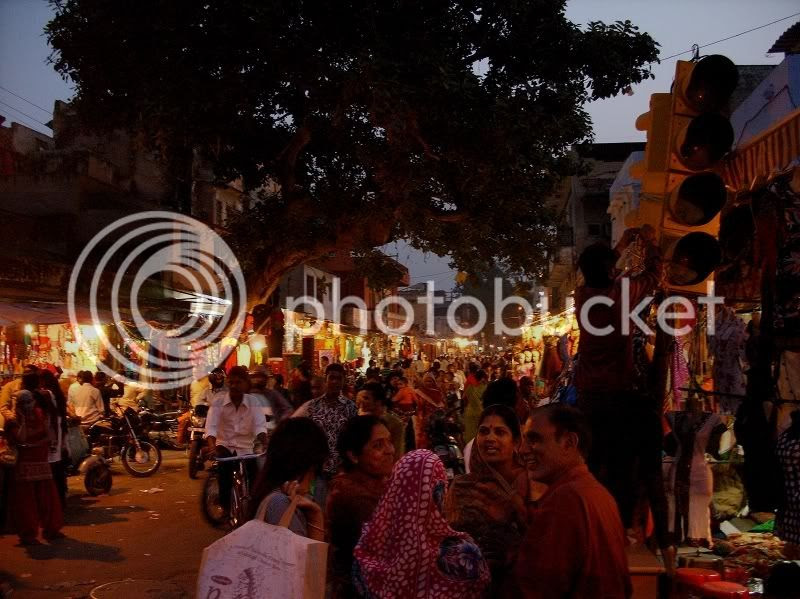 So we progressed back to the hotel, happy to have actually managed to get out on our own, pleased with the outcome and to have interacted with ‘real people’ in spite of our fears and the language barrier.

That night we play tourist at a large open-air restaurant, complete with local music and women dancing, presumably telling a story, including a particular dance involving balancing 7 or 8 jars on the dancer’s head before she stood on swords. Not our thang, but done with considerable skill.
at 5:07 pm